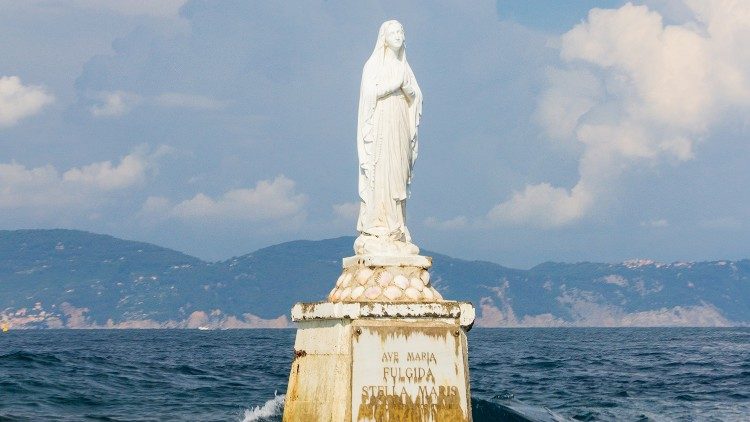 ProgramsPodcast
On this Sea Sunday, the Stella Maris International Director, Fr Bruno Ciceri, praises seafarers for the work they do, and for the goods that they transport to make our lives more comfortable amid a global pandemic.

The annual Sea Sunday, which this year is being observed on 11 July, is a day that invites us to give thanks for the lives and work of seafarers, and affords an opportunity to pray for them and their families.

There are around 2 million seafarers currently on board merchant ships, which carry everything from electronics to food and medicine.

It’s estimated that in September 2020 there were 400,000 seafarers still stranded on their ships due to the difficulties of making crew changes amid the Covid-19 pandemic.

According to the International Maritime Organisation (IMO), another 400,000 “are stuck at home, unable to join ships and provide for their families”.

There is no doubt that the pandemic has had a severe impact upon more vulnerable sectors such as fisheries, yet through the hard work of seafarers, supermarket shelves around the world have continued to be stocked during the outbreak.

For charities such Stella Maris, it’s all the more reason that seafarers should be recognized as key workers and vaccinated, so that they can continue their vital work during this pandemic.

Fr Bruno Ciceri is the International Director for the Stella Maris network, based at the Dicastery for Promoting Integral Human Development in Rome. In an interview with Vatican News, he described the current situation as “very difficult”, with some seafarers succumbing to mental stress and even suicide.

Listen to the interview with Fr Bruno Ciceri

On the question of vaccinations, Fr Ciceri said, “there were a lot of appeals from the Secretary General of the United Nations, the Secretary also of IMO and ILO, even the Holy Father intervened on requesting that the seafarers would be declared as key workers.”

He explained that being able to access a vaccine greatly depends on each individual country. In places like Belgium and the United States, crew members have been able to go to the Seafarers Centre to receive their jab. However, in other countries, being able to get the vaccine has proved a lot more difficult.

Sea Sunday: Response of seafarers to pandemic in India

A few years ago in 2011 and 2012, the issue of piracy was rampant, with hundreds of vessels being hijacked for their cargo in areas like the Gulf of Aden.

Fr Ciceri said that although the situation has since improved, there have been a least 38 incidents reported over the past year. He pointed out that piracy poses a real danger to seafarers especially in West Africa, Nigeria, Ivory Coast, Benin and Togo.

In other parts of the world, there is the threat posed by criminals who, according to the Stella Maris director, board vessels and “try to steal anything they find on board.” He went on to say that it is essential that ship owners make their vessels as secure as possible.

As Sea Sunday is marked around the world this 11 July, Fr Ciceri said it was important to remember that seafarers, even amid a pandemic, keeping working. “They keep sailing from one port to another to deliver goods, to deliver also medicine.”

He highlighted that during periods of lockdown, people experienced what it was like to live, at times, in confined spaces for a period of time.

But seafarers, emphasized Fr Ciceri, are locked down for the duration of their contracts, which are nine months minimum. He also noted that, amid the pandemic, they cannot even leave their ships.

It is worth reflecting on, said the Stella Maris international director, that 90% of the goods we consume are delivered to us courtesy of ships. “So we are really in debt to the seafarers for the work that they do and for the goods that they bring to make our lives more comfortable.”