How J.R.R. Tolkien spoke about the beauty of Mary 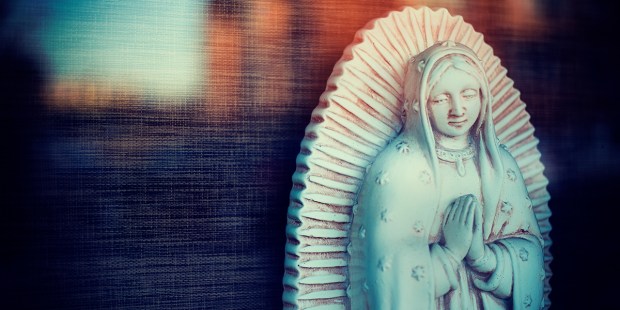 The acclaimed novelist loved the Blessed Mother and considered her the standard for beauty.

My daughter is currently reading The Lord of the Rings for the second time. As she progresses, I’m trying to point out to her some of the interesting Catholic trivia hidden within it. For instance, did you know that the date when Frodo finally destroys the ring is March 25? That day happens to be the feast of the Annunciation, the day on which Christ was conceived and began the process of overthrowing evil once and for all. Or, did you know that the Lembas (the special Elven bread) is strangely similar to the Eucharist? These allusions to Catholicism aren’t surprising. After all, Tolkien was a committed Catholic whose faith was central to the way he viewed the world. He says,”Out of the darkness of my life, so much frustrated, I put before you the one great thing to love on earth: the Blessed Sacrament.” With The Lord of the Rings, he didn’t set out to write a specifically Catholic novel, but later admitted that it did turn out to be,“a fundamentally religious and Catholic work; unconsciously so at first, but consciously in the revision.”

My favorite bit of Catholicism that seeps through into the books is the appearance of the Blessed Virgin Mary. The elf Galadriel isn’t strictly speaking an analogy for the Blessed Virgin – meaning she isn’t simply a character that’s Mary in disguise — but she shares a number of characteristics with Mary. Tolkien considered her the “greatest of elven women,” in the same way we might consider Mary to be the greatest of all saints. She is a queen, a mother, and often appears as a miraculous helper. Sometimes, she is referred to simply referred to as, “The Lady of Light.“

These are clear references to the Blessed Virgin. Mary shares all of these characteristics. She often appears to those in need to offer aid, which is why one of her titles is, “Mother of Perpetual Help.” The most interesting image of Galadriel occurs in The Two Towers, when she appears as an apparition to Sam and offers assistance. Tolkien writes, “Far off, as in a little picture drawn by elven-fingers, he saw Lady Galadriel standing on the grass in Lorien, and gifts were in her hands. And you, Ringbearer, he heard her say, remote but clear, ‘for you I have prepared this.’” She then reminds Sam that he has a miraculous light that will cast out the darkness and all the evil creatures who dwell in it. Sam uses it and he and Frodo are saved.

Tolkien really loved Mary. He even translated the Hail Mary into an elven language. Above all, he considered her to be the standard for beauty, which is why he describes Galadriel as surpassingly beautiful. In a letter to a priest friend, Father Robert Murray, who had pointed out the similarities between Mary and Galadriel, Tolkien writes, “I think I know exactly what you mean … by your references to Our Lady, upon which all my own small perception of beauty both in majesty and simplicity is founded.”

That’s an audacious claim, to say that Mary is the foundation upon which all other beauty is built. What does he mean by this? He probably doesn’t mean that she is the most physically beautiful woman who has ever lived. He’s referring to an inner beauty, a beauty of soul. This is why he talks about her majesty, which in the Catholic tradition is based in her humble obedience to God’s call, and her simplicity, by which he means her life as intensely focused on love alone, suffering no complicating distractions. Mary’s physical beauty is a reflection of her beautiful soul.

Yes, Tolkien’s claim is shocking at first, but it’s a truly Catholic claim. For instance, the Venerable Fulton Sheen says something similar;

“Mary’s beautiful purity must have been such that it attracted less the eyes than the souls of men … It is very likely that a human eye, looking on Mary, would scarcely have been conscious that she was beautiful to the eye. Just as corrupt men are made pure in thought by the sight of an innocent child, so all fleshly thoughts would have been left behind, by one vision of the Immaculate Mother.”

He’s saying the same thing as Tolkien, that her simple beauty becomes the foundation for purifying the minds of those of us who look to her. If our lives are made beautiful, if our souls begin to glow with love, it is because we first saw the beauty of our spiritual Mother.

The way Tolkien describes Mary’s beauty helps us to define what it really is. It has nothing to do with physical looks or flattering clothes; it has everything to do with the way the soul shines through and makes a person beautiful inside and out. Beauty is pure, innocent, graceful, and transcendent. It is radiant with love. If we too would be beautiful, the first place to adorn is our interior life. In this, we can have no better example than the Blessed Virgin.