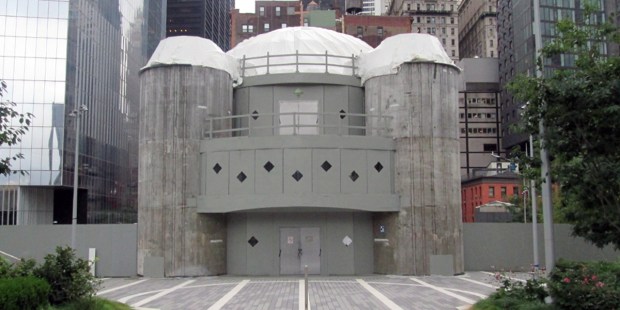 Architect Santiago Calatrava saw the Virgin Mary as model of both ancient church and Ground Zero house of worship.

The historic church building of Hagia Sophia in Istanbul might have been turned into a mosque by the Turkish government last month, but a church being built in New York City will carry on its architectural and religious heritage.

The new St. Nicholas National Shrine of the Greek Orthodox Church in America was inspired by the architectural elements of Hagia Sophia and the Church of Our Savior in Chora, Turkey.

St. Nicholas replaces the modest church that stood at 155 Cedar Street, a former town house, since 1916 and was destroyed when World Trade Center Tower Two collapsed on September 11, 2001.

In the early days of the church’s existence, many of the immigrants who stopped into St. Nicholas after passing through Ellis Island to thank God for a safe journey may very well have come from the city once known as Constantinople. Hagia Sophia, which was a Greek Orthodox cathedral until the Ottoman Empire conquered the city in 1453, spent several hundred years serving as a mosque. Then, in 1934, under Turkish secular reformer Mustafa Kemal Atatürk, it became a museum, a status it held until last month.

When Spanish architect and engineer Santiago Calatrava began designing a replacement for St. Nicholas, he had Hagia Sophia in mind.

“I was trying to build a building that while being modern, reflected the tradition of Orthodoxy,” he told the BBC in 2015. “I studied carefully Hagia Sophia, and I focused on a mosaic. You see [Roman Emperor] Justinian presenting a model of a church that would become Hagia Sophia, then a certain resemblance between the church carried by Justinian and the figure of the Virgin with the Child [next to him], who is sitting on a throne appears into my eyes. And then I went through this process, decoding, decoding, with the idea that maybe there’s an analogy between the model that Justinian is carrying  and the icon of the Virgin with the Child.”

Calatrava, who also designed the World Trade Center Transportation Hub, said that he then worked on a series of sketches that showed the “metamorphosis” of the form of the Mother and Child into the shape of the church.

The church, which will be the only non-secular building at Ground Zero, will be lit from the inside at night, its luminescence due to its construction of thin Vermont marble laminated to glass. Calatrava said it will be a bit like candlelight, overlooking the September 11 memorial.

Originally scheduled to be completed by 2017, construction has been stalled but recently recommenced. Archbishop Elpidophoros of America spoke of its timeliness recently when he wrote in an update on the church’s construction: “Even as Hagia Sophia is manipulated to satisfy shortsighted exclusionary objectives of ‘glory’ and dominate, the St. Nicholas National Shrine and Church will become an open and inclusive witness of what is best in all human aspirations for the Divine.”