Hush! The mysterious portrait of St. Anne, the mother of the Blessed Virgin 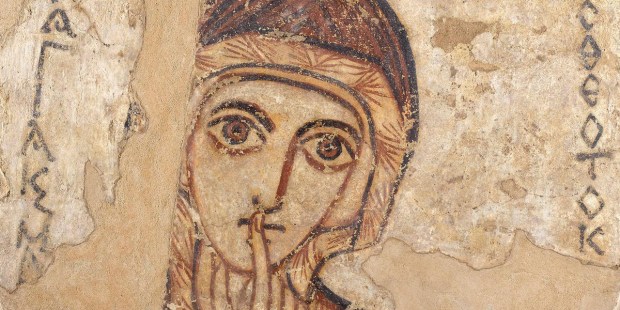 St. Anne is portrayed with her finger to her lips in this 8th- or 9th-century fresco, discovered in old Nubia in present-day Sudan.

Aunique portrait of St. Anne, mother of the Blessed Virgin Mary, was discovered in the 1960s by a Polish archaeological team during an excavation of the Faras Cathedral in old Nubia, in present day Sudan.

What makes the portrait so mysterious is St. Anne’s unusual gesture. She is portrayed with the index finger of her right hand raised to her lips.

The painting, which since 1964 has been part of the collection of the National Museum in Warsaw, was discovered by a team of archaeologists led by Professor Kazimierz Michałowski as part of a UNESCO project to preserve relics from the medieval Nubian kingdom, which once ruled the Nile Valley. The Nobadian rulers converted to Christianity around 548, thanks to  missionaries sent from Constantinople by the Empress Theodora.

We know the wall painting is of St. Anne, the mother of the Virgin Mary, and grandmother of Jesus, because of the inscription below it, which reads: “Saint Anne, mother to the Mother of God. Saint and …”

St. Anne is not mentioned in the New Testament — all of our information about her comes from apocryphal literature such as the Gospel of the Nativity of Mary, Pseudo-Matthew and the Protoevangelium of James.  According to tradition, St. Anne was the mother of Mary, and the grandmother of Jesus. St. Anne and her husband Joachim were childless until, thanks to prayers and their faith in God, they conceived and gave birth to a daughter, Mary.

St. Anne was venerated in ancient Nubia, and it’s believed that women would pray to her asking her help in conceiving and giving birth to a child

Why is St. Anne of Faras asking for silence? Or is she?

St. Anne’s gesture of placing a finger to her lips is the only known such depiction of its sort. There are a number of different interpretations of its meaning.  Some scholars posit that she is asking for silence, which according to the website ArchaeoTravel.eu, might allude to “divine silence.” Another theory is that the gesture simply indicates that she is praying.

According to Archaeotravel.eu, the gesture, which is rarely seen in Christian art, may refer to a Egyptian Christian (Coptic) tradition in which people prayed quietly while holding a finger of the right hand on one’s lips. The gesture was supposed to protect people from the evil that would try to enter the human heart during prayer.