The ancient Marian icons of the Greek Catholic Church of Our Lady of Damascus in Valletta, Malta 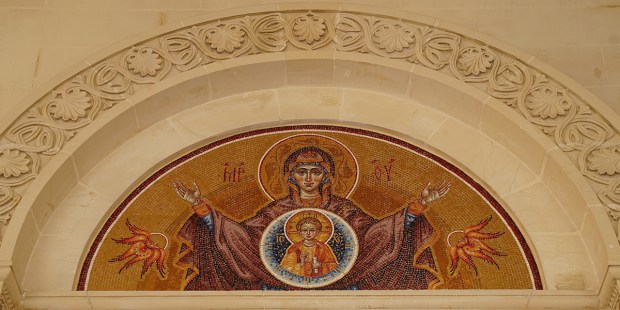 These deeply venerated icons were brought to Malta by expatriate Greeks from the island of Rhodes.

These deeply venerated icons were brought to Malta by expatriate Greeks from the island of Rhodes, which in 1522 had been invaded by a huge Turkish army under the personal command of the Ottoman Sultan Suleyman the Magnificent. After a protracted siege, and being hopelessly outnumbered, the Knights Hospitallers and their Greek allies finally capitulated and stipulated an agreement with the Turks, according to which the Knights were to withdraw from Rhodes and any Greeks who wished were to be free to leave with them. In fact, about 4,000 Greeks left Rhodes, not wishing to live under Turkish rule, and of these some 500 settled in Malta in 1530, when the Knights established their little sovereign state on the Maltese Islands. Among these Greeks were members of the Calamias family, the owners of the two icons in question.

Read more:
The fascinating story of the Marian National Shrine and Our Lady of the Grotto of Mellieħa, in Malta

The more ancient icon was originally venerated in Damascus (Syria), whence it took its name. It was said to have reached Rhodes under miraculous circumstances in 1475. From the first it was intimately associated with another wonder-working icon, the Eleimonitria. When the Turks besieged Rhodes in 1522, the two icons were together taken, for safety’s sake, to the church of St. Demetrius within the city walls. The Eleimonitria seems always to have been in Rhodes in its own church.

The two icons and the churches that contained them were owned, in hereditary patronage (jus patronatus), by the Calamias family, a distinguished Greek family with a fine record of service to the local Church. The first known member of the family was the priest, Papàs Dikeos, who had a son, also a priest, Papàs Nicholas, Vicar General of the Metropolitan diocese of Rhodes. When Nicholas got married, his wife Joanna brought him as dowry the two precious icons and their respective churches. Papàs Nicholas died before the siege, and it was his widow Joanna who was responsible for the transportation of the icons from Rhodes to Malta. This was possible through the good offices of a kinsman, Joannettino Camus, who was barber-surgeon on the Order’s great ship, the Gran Carracca Sant’Anna. The icons were taken aboard and placed in a cabin where they could be venerated, and so reached Malta.

Read more:
Malta, a land of Marian devotion and veneration

The Greeks in Malta were under the special protection of the Order of St. John. By brief of Pope Clement VII dated October 1, 1530, they were exempted from the jurisdiction of the local bishop and placed under that of the Grand Prior of the Order. Significantly, they were in full ecclesial communion with their Latin brethren, for under the Order’s rule in Rhodes, Church union was maintained, and Latin Archbishop and Greek Metropolitan functioned peacefully side by side. So, the Greeks in Malta were at once provided with three churches in the Borgo (later called Vittoriosa): St. Catherine, situated in the churchyard of St. Lawrence, and re-named “Our Lady of Damascus,” because of the presence of the precious icon; St. Agatha, re-named St. Anthony, which housed the Eleimonitria; and St. Nicholas, re-named St. George.

The Damascene icon and the Great Siege

The Knights held the two icons of the Mother of God in great veneration, as did the local Maltese population. As mentioned in our previous article, on the Chapel of the Nativity of the Blessed Virgin in Fort St. Angelo, Grand Master Jean Parisot de la Valette, in particular, was a fervent devotee and prayed regularly before the Damascene icon, especially during the Great Siege of 1565. When the siege was raised, the grateful Grand Master, on his way to a service of thanksgiving at St. Lawrence Church, stopped to pray before the icon of Our Lady in the Greek church and there presented his hat and sword as a votive offering and gesture of gratitude. They still hang there today, even though the Greek parish in Vittoriosa ceased to exist in 1832.

After the Great Siege of Malta in 1565, the Order of St. John decided to build a new city on the promontory dividing the Grand Harbor from Marsamxett Harbor, naming it Valletta after the victorious Grand Master.  In 1569 the Greek community was granted a site in the new city for their own parish church, close to the Order’s hospital: this church was dedicated to St. Nicholas of Myra and is still in use as a Greek-Catholic church.

Shortly before the Great Siege, Joannes Calamias planned to erect one or two churches as shrines for his two precious icons. At first, he had some difficulty in vindicating his claim of ownership, but was easily able to prove his case before a special commission of senior Knights. In point of fact, only one church was built in Valletta on its present site: it was dedicated to Our Lady of Damascus and also housed the Eleimonitria. He did not live to see his church completed: but his executors proceeded with construction until completion in 1580.

After a few years, this church became the parish church for the Greek community on the Maltese Islands. In 1587 the Damascene icon was transferred with great pomp and ceremony from Vittoriosa to its new church in Valletta. In 1639 the parish priest Papàs Ioannis Metaxi conceded, without prejudice to his parochial rights, the use of the church to the Sodality of the Holy Souls, which subsequently re-structured and enlarged it.

The church and its icons in the 20th century

On October 25, 1931, the icon of Our Lady of Damascus was solemnly crowned by the Vatican Chapter on the occasion of the celebration of the 15th Centenary of the Council of Ephesus (431 A.D.), when the Blessed Virgin was universally recognized and acclaimed as Theotokos, that is, the Mother of God.  The date also coincided with the fourth centenary of the icon’s arrival in Malta.

During World War II the Church of Our Lady of Damascus was totally destroyed by enemy action in one of the air raids on the Grand Harbor on March 24, 1942, and some 30 icons and other liturgical objects were lost forever.  However, reconstruction work was completed by 1951. Fortunately, the titular icon had been removed to a safe place and did not suffer war damage. But the Eleimonitria icon, which had been left in the church, was reduced to fragments. The fragments were piously collected and preserved; and in the 1980s, the pieces were carefully re-assembled, and the icon restored by our capable restorers at the National Museum of Fine Arts. It is now exposed for the veneration of the faithful in a specially sculptured oak wood niche.

Because of its old age and checkered history, the icon of Our Lady of Damascus was in a very poor state of preservation. Already in 1930 it had undergone urgent restoration at the hands of the two brothers, Vincenzo and Carmelo Bonello. It received more thorough restoration in the years 1963-1966 at the Central Institute of Art Restoration in Rome (Istituto Centrale del Restauro): layers of later and very inferior over-painting were removed, and this made possible the re-discovery of the original appearance of the wondrous icon.

Read more:
The ancient, legendary story of the Chapel of the Nativity of Mary of Fort St. Angelo

In the post-war years the Church of Our Lady of Damascus was re-built in Byzantine style on the design of a local architect, Orazio Diacono. The new church was consecrated on August 15, 1951, by Bishop George Kalevassy, Apostolic Exarch and Pastor of the Greek-Catholic community in Greece.  In the church one can admire a fine collection of icons, and among these a striking 16th-century icon of the Deposition from the Cross (Epitaphios) attributed to Emanuel Lambardos; a whole series of icons by the Russian iconographer Grigorij Maltzev; an icon of the Nativity of Mary by the Ukrainian monk-iconographer Father Juvenalij; and a Crucified Christ by the famous Maltese painter, Anton Inglott.

Currently, research and restoration works on the icon of Our Lady of Damascus are being carried out by a highly qualified team of restorers of the Atelier del Restauro, led by Dr. Maria Grazia Zenzani and Ms. Valentina Lupo.  Who knows, maybe Our Lady of Damascus will surprise us again!

Make sure to visit the slideshow below to discover some of the most beautiful artistic details of this unique church. 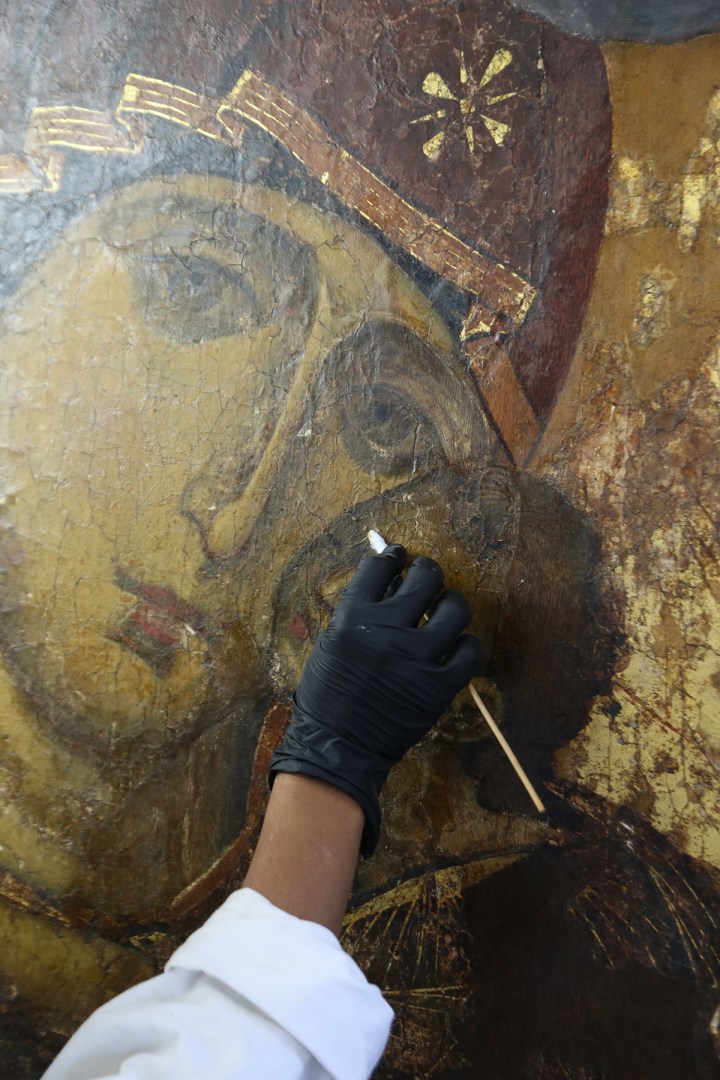 Buhagiar M., “The Virgin of Damascus in the Greek Catholic Church, Valletta, Malta The Shared Veneration of a Miracle-Working Icon” Department of Art and History, University of Malta