How Catholic leaders in Assisi, and even a German officer, saved Jews in WWII 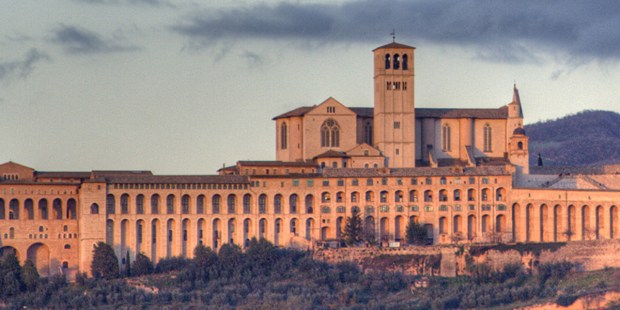 Working for different causes, they nevertheless saved the town, and some 300 refugees, from disaster.

Graziella Viterbi remembers when she learned how to make the sign of the cross. She was just a young girl, living temporarily in Assisi, St. Francis’ hometown.

But she was not Catholic. Not even Christian.

It was in the middle of World War II, and Nazi troops had invaded Italy in 1943. But they declared Assisi a hospital town, and Viterbi’s family felt it would be safer there for Jews like them.

Some 200-300 Jews fled to Assisi during the war and were saved because local Church leaders set up a secret organization that “hid refugees in monasteries and convents or created fake identities for them,” said a 1998 New York Times article.

With the aid of a local priest, the Rev. Aldo Brunacci, Ms. Viterbi’s family moved into an apartment. Posing as displaced Catholics from southern Italy, they were given phony identification papers and new names. For Ms. Viterbi and her sister, Miriam, who was 10, it was a life of strained normalcy. They studied the geography of the village from which they had supposedly come and sometimes went to church, though at first they had no idea what to do.

”We had to have people teach us how to make the sign of the cross,” she said.

Such precautions were necessary because those caught hiding Jews could be shot. One day local Fascists, who suspected church leaders of harboring Jews, stormed into Father Brunacci’s home to arrest him. Ms. Viterbi’s father and mother were visiting at the time, but the priest acted quickly, pushing them behind an open door, where they were shielded while he was taken away.

Father Brunacci was imprisoned for a time, then released to the custody of the Vatican.

The dramatic history of Assisi’s role during the war is detailed in the exhibition titled “Memorial Museum, Assisi 1943-1944” in the Vallemani Palace’s Municipal Picture Gallery. The exhibition collects unpublished documents, pictures, acknowledgments, essays and objects about that period and about the people who rescued Jews.

Those rescuers included Bishop Giuseppe Placido Nicolini and his secretary, Fr. Aldo Brunacci, private secretary, who coordinated a network of hiding places for Jewish families in the city’s convents, monasteries and private homes.

“Practically all the Italian clergy were working on similar lines as ourselves,” said Fr. Brunacci.

Meanwhile, German Colonel Valentin Müller was appointed head of medical operations in Assisi. A Nazi, he was nevertheless a devout Catholic who worked to save Assisi from destruction.

The story is told in a 2012 interview with Italian Scholar Francesco Santucci by National Catholic Register correspondent Victor Gaetan.

A medical doctor who would favor religious over national identity in some key strategic decisions, Müller had been placed in charge of German medical operations in Assisi; in 1944, he was assigned to serve as its German commander. A cradle Catholic from Bavaria, he had attended minor seminary from age 13 to 20 before entering medical school. His military assignment before Assisi was in Lourdes, France, where he served as medical director.

While in Assisi, Müller attended daily Mass and Communion at St. Francis’ tomb.

According to Santucci and to Don Aldo’s testimony, it was Müller who initiated a campaign to designate Assisi as a “hospital city.” Under the Geneva Convention that governs wartime engagement, that meant the area gained immunity from fighting and could not be bombed.

By May 1944, American troops were pushing the Germans further north, and there was a danger that departing Nazi troops might destroy buildings in Assisi before giving up the territory. Müller sent hospital staff to guard Assisi’s gates and prevent troops from entering the town, “setting up an around-the-clock barricade to preserve Assisi’s demilitarized identity,” the article said. Müller stayed until June 16, a day before the Allies arrived in the Umbrian town.

Santucci testified, “The people of Assisi felt that they were protected by God, St. Francis and Colonel Müller.”

The whole story can be read here.