RIP: Cardinal who gave JPII last rites and his left hand (What a story!) 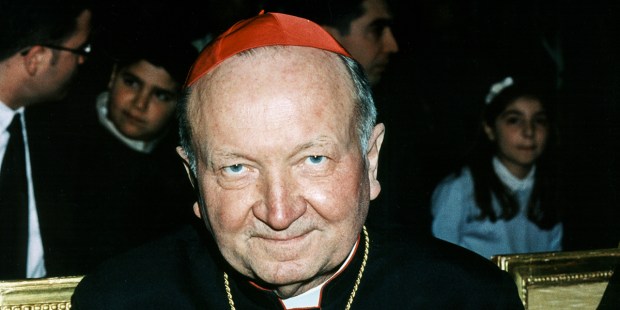 Cardinal Marian Jaworski died this month at the age of 94. His life was intimately connected to that of John Paul II.

Cardinal Marian Jaworski, retired archbishop of Lviv of the Latin Rite Catholics of Ukraine, died on September 5 at the age of 94. He was a close friend of John Paul II, and administered the last sacraments to the Polish pope on his deathbed in 2005.

Jaworski was born in 1926 and entered the major seminary of Lviv in 1945. Following the occupation of the territory by Soviet troops, he was sent to Kalwaria Zebrzydowska, Poland. Ordained a priest in 1950, he continued his studies at the Jagiellonian University in Krakow (Poland) and then at the Faculty of Philosophy of the Catholic University of Lublin (Poland). It was during this period, while far from his country, that he met the future Polish pope.

At his death, various commentators recalled how John Paul II thought his life and the life of Cardinal Jaworksi were intertwined not just in their friendship and physical proximity, but in a mystical way.

PBS Frontline once told the story: It was recounted by another friend of the Holy Father’s, Stefan Swiezawski, who explained that John Paul was convinced that certain important moments in his life were connected to his friends’ suffering.

On the night of John Paul II’s election to the papacy, Bishop Andrzej Deskur suffered a devastating stroke … John Paul II spent much of the first day of his papacy at the bedside of his beloved friend and supporter. He reflected on Deskur’s illness with his former teacher, Stefan Swiezawski. … Swiezawski recalled their conversation: “John Paul II spoke about his conviction that the most important events in his life have been connected to the suffering of his friends. He believes that Bishop Deskur’s stroke was a way of paying for his election to the papacy and also that his elevation to cardinal was intimately tied to the tragedy of another friend, Father Marian Jaworski, who had lost his hand in a railway accident.”

Cardinal Jaworski lost his hand because of a train accident. But he was on the train because of the future John Paul II.

It was June of 1967 and Karol Wojtyla (the future John Paul II) had been called to Rome to be made a cardinal. Wojtyla already had had something on his schedule for the date of the consistory — a trip to Olsztyn, Poland — and he asked Jaworski to take his place. It was during this trip that the accident occurred, which led to the amputation of Jaworski’s hand.

The Holy Father’s mysterious reflection is rooted in his sense of what St. Paul speaks about: That all the baptized form one body, the body of Christ.

Since we are all joined in the mysticus corpus, our actions affect each other spiritually, both for good and ill. My sins wound not only myself, but the whole body. As well, the sacrifices we unite to the Cross can become, through the power of God, channels of grace, for ourselves and for the whole body.

John Paul II felt that in the great battle of good and evil underway until the end of time, and in light of the role he was destined to have in the Church, that his friends’ sacrifices, accepted with docility and holiness, were channels for the great graces given to him in his mission as Vicar of Christ.