What happened to the True Cross of Christ? 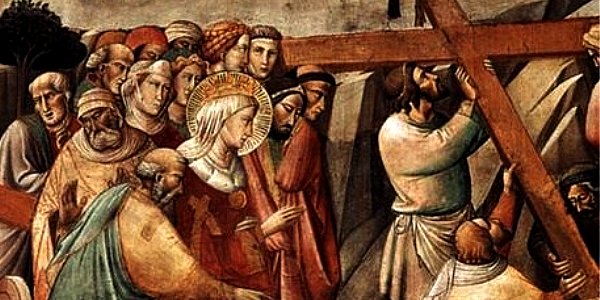 Hidden many times and then rediscovered, chopped into pieces and dispersed, the precious relic has taken many journeys.

Click here to launch the slideshow
It is difficult to retrace with accuracy the path the True Cross of Jesus  has taken since its discovery by St. Helena during a pilgrimage to the Holy Land in 326. At the time of the pilgrimage, the Church was rapidly growing. Christians, after a long period of persecution, could freely practice their religion and were able to go on a quest for their revered relics.  Helena joined Christ’s faithful, alongside her son, the Roman Emperor Constantine I, and at the age of 80, went off in search of the most sought-after relic: the Cross of Jesus.

After the death of Jesus, tradition claims that those who were trying to prevent the spread of Christianity hastened to make any of the objects involved in the crucifixion disappear, in an attempt to discourage those who would want to retrieve any relics. Tradition also claims that, at Golgotha, the cross was thrown into a hole in the ground, along with those the two thieves were crucified on. Arriving at the Holy Land 300 years later, the Empress ended up finding the three crosses, but which one belonged to the Lord? To find out, the bishop of Jerusalem had an idea: he made a sick woman, previously incurable, touch the wood, and upon touching one of the three she was healed straight away. Helena had no doubt at all: she had found Jesus’ cross. Immediately, she ordered the building of a church where it was discovered – which she called the Church of the Resurrection – and set off for Rome. According to Christian tradition, the relic was well preserved until 614 and visited by a multitude of Christians.

Read more:
Are the relics of Christ and the Apostles authentic?

Later, the cross disappeared into the hands of the Persians. The relic would be their “trade off” in the event of any negotiations with the Eastern Roman Empire (the Byzantines). But in 630, Heraclius, the Emperor of the Byzantine Empire, had a resounding victory over the Persians, and triumphantly returned a part of the Cross to Jerusalem — the other part was left in Constantinople — where he himself placed it at Calvary. This event is commemorated by the Church on September 14, proclaimed as the feast of “The Triumph of the Cross” or “The Exaltation of the Holy Cross.”

However, a few years later the Arab conquest began and Jerusalem came under Muslim rule.  Up until the 10th century, the worshipers of the True Cross continued to exist, without suffering much harm. They even increased in territories that had remained Christian; in particular, Constantinople. When difficulties arose and the Christians were persecuted, the Cross was withdrawn from its setting and hidden once again. Ninety years later (in 1099) it reappeared once more and was reinstated in the Basilica of the Holy Sepulchre. It became the symbol of the Crusader Kingdom of Jerusalem.

Read more:
This church holds the relics that St. Helena brought back from the Holy Land

However, that was just for the time being, as in 1187, the True Cross disappeared once again, and this time definitively, on the battlefield of Hattin, next to Lake Tiberius in Galilee. The crusaders had taken it with them to bring victory against the Sultan Saladin. However, they lost the battle, and Jerusalem fell into the hands of the sultan. The Cross disappeared without leaving a trace. Legend has it that Pope Urban III, on hearing the news, dropped dead.

In 1203, the fragment preserved in Constantinople suffered the effects of the Fourth Crusade, which left from the Republic of Venice in an attempt to recover Jerusalem but was diverted to Constantinople to topple the Byzantine Empire and found in its place an Eastern Roman Empire. The relics of the Palatine Chapel of Pharos were shared between the Venetians and the new empire. Nevertheless the latter, threatened from all sides and on the brink of bankruptcy, had to sell its treasures. St. Louis, in 1238, bought two fragments of the Cross, then in 1242 other relics, presumed to be the Instruments of the Passion (crown of thorns, the Holy Spear, the Holy Sponge …), which he had preserved in the Sainte-Chapelle, built for this purpose on the Île de la Cité, in Paris. But during the French Revolution (1794), the fragments of the Cross disappeared. Only a few fragments and a Holy Nail remain, and are conserved today in the treasury of the sacristy of Notre-Dame Cathedral.

All the pieces of wood distributed or sold as relics across the globe over the centuries (especially since the Middle Ages) have been preciously conserved in a number of churches. According to various analyses and inquiries, the supposed “true” fragments of Jesus’ cross only make up in volume a tenth of the Cross; all the rest were determined to be of a questionable source. We refer to the likely relics as Lignum Crucis (“wood of the Cross”). The largest fragment is preserved in Greece in the monastery of Mount Athos; other fragments are in Rome, Brussels, Venice, Ghent, and Paris.

Check out the slideshow below to discover Christ’s Relics.